Due to the way my life panned out after school I have always travelled, initially by accident and then by design. I consider it one the the most enriching and educational processes in life and I believe in Mark Twains reputed quote that ‘travel is fatal to prejudice, bigotry and narrow-mindedness’. I’ve pro-actively created space for travel in my life and I’m beyond grateful for the opportunities I have had and that I live in a country and culture that makes it possible.

After a tricky time at school, I spent three years travelling and working around Europe in the 1980’s including working in Holland in the bulb industry (and ended up returning five times), grape picking in France twice, tomato picking in Crete and then stepping out of Europe to work on a Kibbutz in Israel.

In pre internet days a chance conversation with a British Jewellery seller on a beach in Crete led to him recommending exploring South Asia. I duly saved up and then spent six months in India and Nepal which had a formative affect on my life and ignited a lifelong interest in in Asian culture and ideas.

On returning I went to university in Brighton UK as a mature student to study a Humanities degree and focused in on Asian religions and culture to further my interest .

18 months in South and South East Asia followed along with two months in China .

The arrival of Children saw me settling in Devon, UK and necessarily putting down some roots for the benefit of my children. As a family though we have managed numerous trips in Europe and two trips to India and one to Indonesia – travelling with kids/teenagers added another perspective on travel.

I’ve also spent over six months in Chiang Mai , Northern Thailand over the last twenty years studying the art of Thai Massage, practicing yoga and immersing myself in Thai culture.

Now my sons are young adults I intend to resume further travel in whatever ways are realistic for this stage of my life and plan to write more in this area.

I use all of these platforms slightly differently - feel free to follow or send me an e mail. 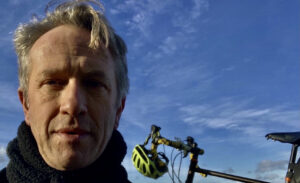